SHS-Ateneo’s Maquiling, Kim Head off to the UAAP 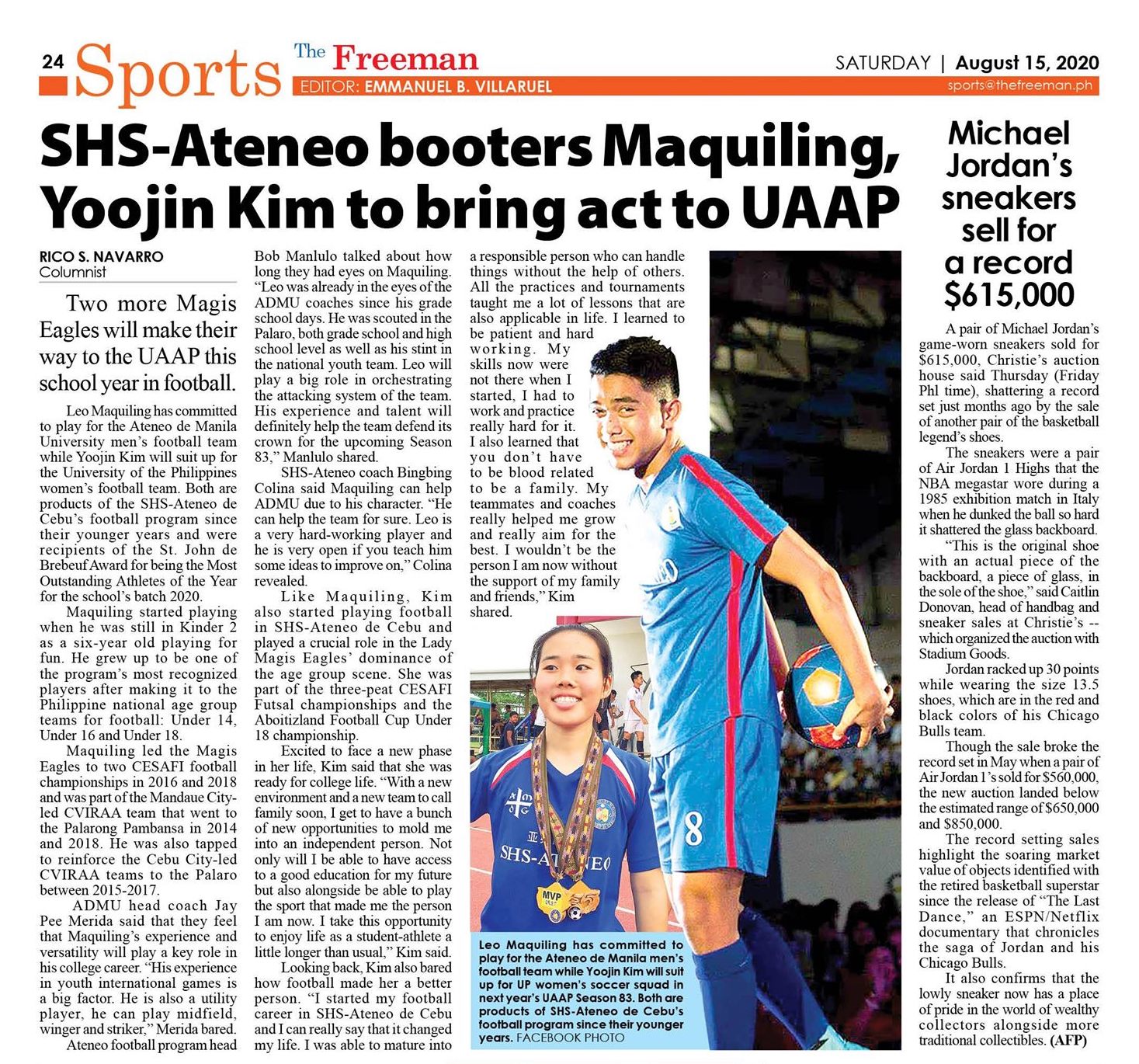 Two more Magis Eagles will make their way to the UAAP this school year in football. Leo Maquiling has committed to play for the Ateneo de Manila University men’s football team while Yoojin Kim will suit up for the University of the Philippines women’s football team. Both are products of the SHS-Ateneo de Cebu’s football program since their younger years and were recipients of the St. John de Brebeuf Award for being the Most Outstanding Athletes of the year for the school’s batch 2020.

Maquiling started playing when he was still in Kinder 2 as a six-year old playing for fun. He grew up to be one of the program’s most recognized players after making it to the Philippine national age group teams for football: Under 14, Under 16 and Under 18. He led the Magis Eagles to two CESAFI football championships in 2016 and 2018 and was part of the Mandaue City-led CVIRAA team that went to the Palarong Pambansa in 2014 and 2018. He was also tapped to reinforce the Cebu City-led CVIRAA teams to the Palaro between 2015-2017. ADMU head coach Jay Pee Merida said that they feel that Maquiling’s experience & versatility will play a key role in his college career. “His experience in youth international games is a big factor. He is also a utility player, he can play midfield, winger and striker,” Merida bared. Ateneo football program head Bob Manlulo talked about how long they had eyes on Maquiling. “Leo was already in the eyes of the ADMU coaches since his grade school days. He was scouted in the Palaro, both grade school and high school level as well as his stint in the national youth team. Leo will play a big role in orchestrating the attacking system of the team. His experience and talent will definitely help the team defend its crown for the upcoming Season 83,” Manlulo shared. SHS-Ateneo coach Bingbing Colina said Maquiling can help ADMU due to his character. “He can help the team for sure. Leo is a very hard-working player and he is very open if you teach him some ideas to improve on,” Colina revealed.

Like Maquiling, Kim also started playing football in SHS-Ateneo de Cebu and played a crucial role in the Lady Magis Eagles’ dominance of the age group scene. She was part of the three-peat CESAFI Futsal championships and the Aboitizland Football Cup Under 18 championship. Excited to face a new phase in her life, Kim said that she was ready for college life. “With a new environment and a new team to call family soon, I get to have a bunch of new opportunities to mold me into an independent person. Not only will I be able to have access to a good education for my future but also alongside be able to play the sport that made me the person I am now. I take this opportunity to enjoy life as a student-athlete a little longer than usual,” Kim said.

Looking back, Kim also bared how football made her a better person. “I started my football career in SHS-Ateneo de Cebu and I can really say that it changed my life. I was able to mature into a responsible person who can handle things without the help of others. All the practices and tournaments taught me a lot of lessons that are also applicable in life. I learned to be patient and hard working. My skills now were not there when I started, I had to work and practice really hard for it. I also learned that you don’t have to be blood related to be a family. My teammates and coaches really helped me grow and really aim for the best. I wouldn’t be the person I am now without the support of my family and friends,” she said.