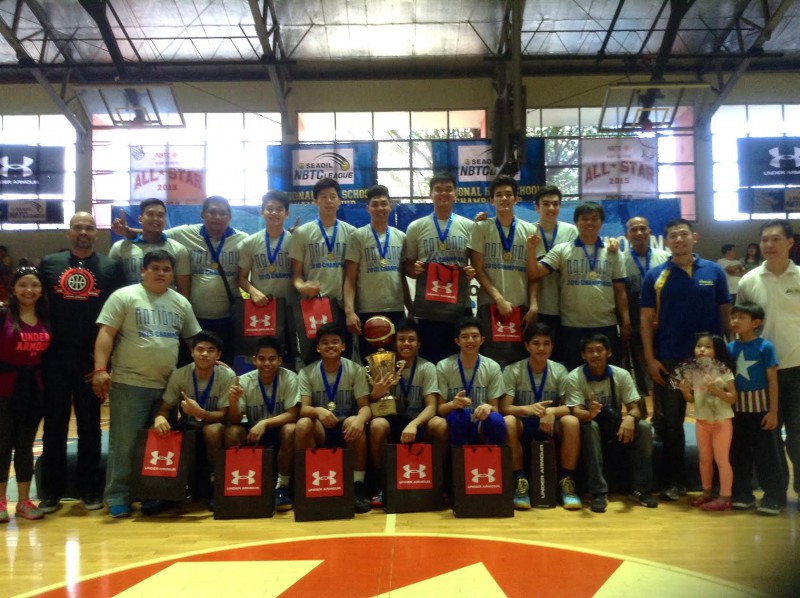 They said it couldn’t be done. They said Manila would be too tough of a mountain to conquer. They said probinsyanos didn’t have a chance. They said a lot, but the Magis Eagles would hear none of it. And prove it they did then they clawed out an 82-78 win over powerhouse San Beda College to win the championship of the 2015-Seaoil NBTC National High School championship at the Meralco Gym yesterday.

Climb an uphill battle they did. San Beda jumped to a 16-2 lead to kick off the game before the Cebu champions rallied to cut the lead 21-18 at the end of the first quarter. The Red Cubs took a 42-38 halftime lead, then padded this to 55-44 midway through the third quarter. The Magis Eagles cut the lead to 59-51 at the end of the third quarter, setting the stage for a close and fourth quarter. After San Beda took a 64-59 lead with 7:40 left, SHS-Ateneo launched its counter attack, tying the game twice at 66-all and then 68-all before taking the lead for the first time at 70-68 courtesy of Zacky Huang. In the ensuing play, Janjan Jaboneta blocked a shot by La Salle-bound Andrei Caracut, leading to another basket by Huang who had six points in the run. The lead ballooned to 74-68 before Jaboneta dropped a heart-breaking triple for a 77-68 lead with3:03 left. Jaboneta made it 79-70 after two free throws by San Beda, but Caracut hit a clutch trey to slice the lead to 79-73,1:06 left. After a San Beda time out and a miss, Jaboneta hit another triple for an 82-73 lead with 34 ticks remaining. Caracut calmly sank two free throws while Norrish Decapia added three more from the stripe with 13 seconds left for the final tally. Jaboneta, who had a subpar performance in the previous games, had a break-out game of 27 points, including three triples. Tournament MVP Joshua Sinclair had 15 points and 17 rebounds while Huang added 14. Caracut and Decapia had 17 points to lead San Beda. Named to the Seaoil-NBTC Mythical Team were Caracut of San Beda, Mark Dyke of National University, JV Gallego of Chiang Kai Shek College, Joseph Mayol of SHS-Ateneo de Cebu and teammate Sinclair, who was also voted Best Defensive Player.

SHS-AdC President Fr. Manuel Uy, S.J. said he was speechless upon learning of the win, “To God be the glory. Grace-filled Jubilee year for us. Thank you Magis Eagles Champs. AMDG!” he said.

The NBTC national championship was a first for the Magis Eagles since the teams from the province were made to match up with Manila-based teams. SHS-Ateneo had won two NBTC national championships previously, but this didn’t include Manila teams. It was a fitting follow-up to their debacle in CVIRAA 2015 last week where they lost in their battle for the gold medal to the Cebu City team which core was composed of players from UV and reinforced by players from USC and CIT-U. (with courtside reports from Popoy Navarro.)