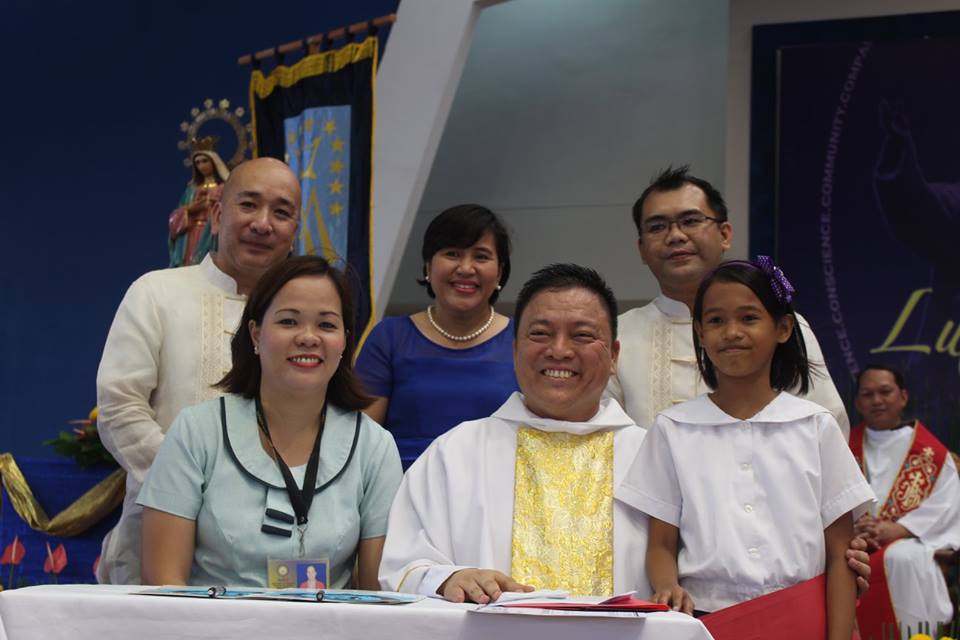 After a month of preparation, finally, The Blue Plate Project was launched on July 30 right in time for the celebration of the feast of St. Ignatius of Loyola. Over fifty pupils from Cubacub Elementary School attended the Eucharistic celebration that was presided by no less than Father Provincial Antonio Moreno, S.J.

After the communion, Fr. Manuel A. Uy signed the Memorandum of Understanding (MOU) with Mrs. Iris M. Petancio, school head of Cubacub Elementary School. Simultaneous to this, Jhana Orongan, one of the feeding beneficiaries, delivered a message of thanks to Sacred Heart School–Ateneo de Cebu. The grade six pupil quoted St. Mother Teresa of Calcutta who said that “at the end of our life we will not be judged by how many diplomas we have received, how much money we have made, how many great things we have done. We will be judged by I was hungry and you gave me something to eat, I was naked and you clothed me, I was homeless and you took me in.” After the Mass, the Cubacub pupils were given a Jollibee party in the Grade School AVR. Representatives of the High School Student Council, the Hurtado Society, the Grade School Magis Society and some faculty members attended the event led by Mr. Rhoderick John S. Abellanosa, Social Involvement Coordinator.

As of July 29, a partial amount of P883,781.10 has been raised for The Blue Plate Project through individual, company and family sponsorships. A bigger fraction of the seed money came from class donations from Kinder to Grade 10. The project’s fund will be used mainly for the mid-day meals of around eighty pupils who have been identified as underweight and undernourished by the Nutrition Coordinator of Cubacub Elementary School. SHS-AdC is looking into the possibility of expanding the project as part of its advocacy to help reduce hunger and malnutrition. This means not only increasing the number of beneficiaries in the current partner institution but also considering the possibility of extending the project, in the near future, to other schools that equally need assistance in the area of nutrition.

For its part, Cubacub Elementary School in partnership with the officials of the barangay Cubacub has offered their kitchen for the food preparation during the actual feeding. It is located within the premises of Cubacub Elementary School. Kitchen assistants and volunteers, mostly the parents of the beneficiaries, have also been identified and organized in order to help in the actual daily operations of the feeding program, which will run for 160 days.

The Social Involvement Office is currently working on preparations for the blessing of The Blue Plate kitchen before the end of August, which will signal the start of the 160-day feeding program.