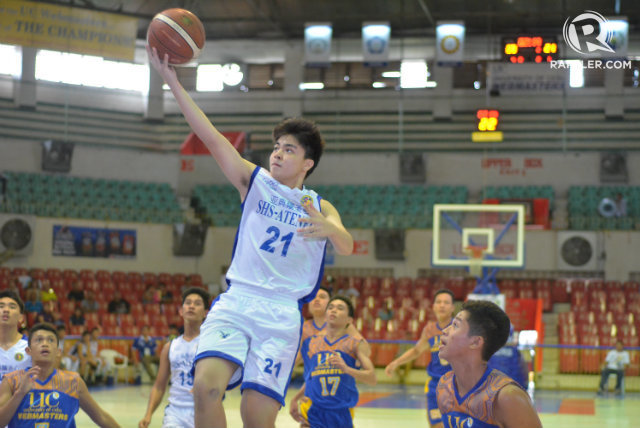 CEBU CITY, Philippines – The Sacred Heart School-Ateneo de Cebu (SHS-AdC) Magis Eagles barged into the final round in the juniors division of the 15th CESAFI men’s basketball tournament with a 79-47 demolition of the University of Cebu (UC) Junior Webmasters Saturday, September 19 at the New Cebu Coliseum.

The University of the Visayas (UV) Baby Lancers, on the otherhand, have done the unthinkable, dashing the title hopes of the second-ranked University of San Carlos (USC) Baby Warriors after handing them their second straight loss, 70-67, in the single round robin semifinal round.

The win allowed the Baby Lancers to stay in contention for the remaining finals ticket which they will contest for against the Junior Webmasters, whose title hopes are still alive despite their loss to the Magis Eagles.

While the Magis Eagles lorded it over the others with a clean 2-0 slate, both the Baby Lancers and the Junior Webmasters tote a 1-1 card. The Baby Warriors, despite one more game against the Magis Eagles, have dropped out of contention with an 0-2 record.

The Magis Eagles will face the winner of the Junior Webmasters versus the Baby Lancers match in the best of three finals while the loser will play for third place against the Baby Warriors which will be a knockout game.

The Magis Eagles continued their winning run as they pounced on the hapless Junior Webmasters, who was not able to emulate the game they employed to upset the Baby Warriors last Thursday.

Jed Cedrick Colonia was named as the best player with another double-double performance of 13 points and 17 rebounds. He also had four assists and three steals.

Andrew Vincent Velasco topscored for the Magis Eagles with 15 points.

The Magis Eagles started the ballgame with a 6-0 run but the Junior Webmasters was able to tie the game twice before trailing by six points, 23-17, going into the second quarter.

With one of UC’s top hoopster, Jason Florence Abejo, limping off the court after he was pushed down, the Junior Webmasters saw the Magis Eagles’ advantage soar to 22 points with a minute and 25 seconds remaining in the first half.

The Magis Eagles did not let up as they post a 26-point lead at the end of the third quarter.

They eventually posted their highest advantage at 34 points, 79-45, inside the last two-minute mark of the ballgame.