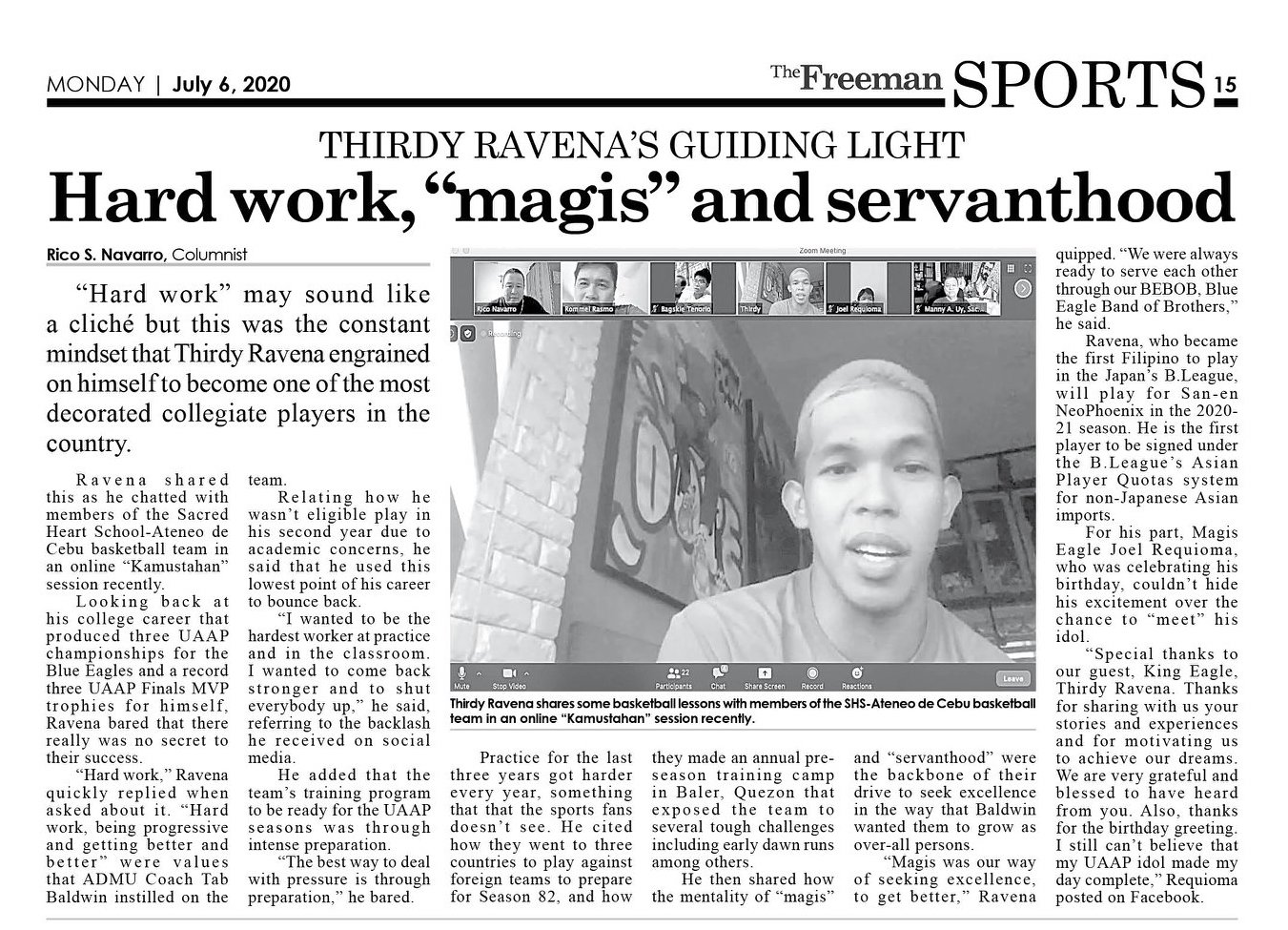 “Hard work” may sound like a cliché but this was the constant mindset that Thirdy Ravena engrained on himself to become one of the most decorated collegiate players in the country. Ravena shared this as he chatted with members of the Sacred Heart School-Ateneo de Cebu basketball team in an online “Kamustahan” session.

Looking back at his college career that produced three UAAP championships for the Blue Eagles and a record three UAAP Finals MVP trophies for himself, Ravena bared that there really was no secret to their success. “Hard work,” Ravena quickly replied when asked about it. “Hard work, being progressive and getting better and better” were values that ADMU Coach Tab Baldwin instilled on the team.

Relating how he wasn’t eligible play in his second year due to academic concerns, he said that he used this lowest point of his career to bounce back. “I wanted to be the hardest worker at practice and in the classroom. I wanted to come back stronger and to shut everybody up,” he said, referring to the backlash he received on social media.

He added that the team’s training program to be ready for the UAAP seasons was through intense preparation. “The best way to deal with pressure is through preparation,” he bared. Practice for the last three years got harder every year, something that that the sports fans doesn’t see. He cited how they went to three countries to play against foreign teams to prepare for Season 82, and how they made an annual pre-season training camp in Baler, Quezon that exposed the team to several tough challenges including early dawn runs among others.

He then shared how the mentality of “magis” and “servanthood” were the backbone of their drive to seek excellence in the way that Baldwin wanted them to grow as over-all persons. “Magis was our way of seeking excellence, to get better,” Ravena quipped. “We were always ready to serve each other through our BEBOB, Blue Eagle Band of Brothers,” he said.

Ravena, who became the first Filipino to play in the Japan’s B.League, will play for San-en NeoPhoenix in the 2020-21 season. He is the first player to be signed under the B.League’s Asian Player Quotas system for non-Japanese Asian imports.

For his part, Magis Eagle Joel Requioma, who was celebrating his birthday, couldn’t hide his excitement over the chance to “meet” his idol. “Special thanks to our guest, King Eagle, Thirdy Ravena. Thanks for sharing with us your stories and experiences and for motivating us to achieve our dreams. We are very grateful and blessed to have heard from you. Also, thanks for the birthday greeting. I still can’t believe that my UAAP idol made my day complete,” Requioma posted on Facebook. The SHS-Ateneo de Cebu team has resorted to online training and have invited a host of guest coaches and personalities to drop by for a chat. Among them have been players Kib Montalbo, SJ Belangel and coaches Eman Monfort, Jeff Codera, Goy Bagares,  Kokoy Cenabre, and Coach Beaujing Acot.